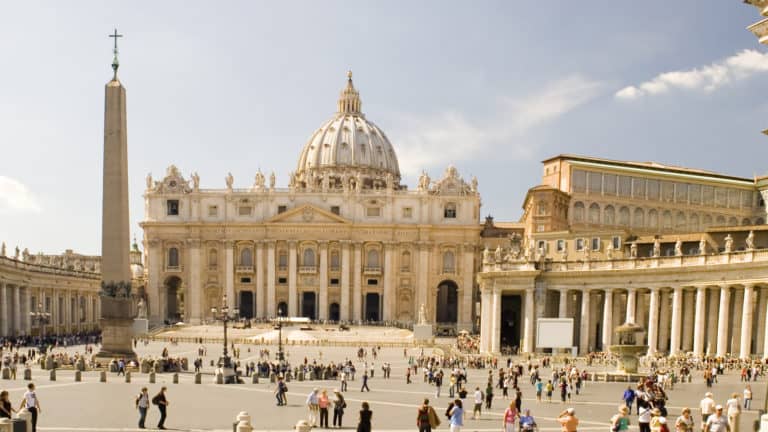 No matter where you go in Montreal, you usually can not turn your head without noticing a church. Churches are an iconic symbol of the city’s architecture and are particularly emblematic of the gothic and renaissance revival eras.

These structures point to Montreal’s old-world roots, and are likely why many of Montreal’s neighbourhoods are said to feel “European.” They are also why Montreal is sometimes referred to as “the City of a Hundred Steeples.” Mark Twain even famously remarked when visiting Montreal that “you could not throw a rock without breaking a church window.”

While all of Montreal’s churches tell a story about the city’s history, religion, and architecture, these basilicas are truly must-see destinations for your next visit.

Located in historic Old Montreal, the Notre-Dame Basilica is as much of a cultural landmark as it is a religious one. Designed by James O’Donnell, the basilica took decades to complete, however, it was operational as early as 1830. It exhibited the Gothic Revival style of architecture that was replicated in basilicas around Montreal and the rest of Canada.

In 1982, Pope John Paul II elevated the Notre-Dame Church to the official designation of “basilica,” and 7 years later the Government of Canada officially proclaimed it as a Historic Site of Canada.

While the facade of Notre Dame Basilica is an icon of Montreal architecture, its interior is what makes it so breathtakingly unique. The ornate altarpiece, pulpit, and Casavant Organs are just a few details that make its interior design so special.

Often called the “Grand Dame” or “Crown Jewel” of Old Montreal, the Notre-Dame Basilica attracts more than 11 million visitors every year, making it one of the most popular tourist attractions in North America. It’s earned its place in history as the venue for events like the funeral of Pierre-Elliot Trudeau, and the wedding of Celine Dion.

Another product of the Gothic Revival style of architecture, Saint Patrick’s Basilica was opened on St. Patrick’s Day in 1847 to serve the growing Irish community in Montreal. Its congregation grew exponentially since then and is now considered Montreal’s oldest English-speaking Roman Catholic Church.

The interior design is a feast for the eyes, with Irish, French and Catholic motifs interwoven throughout. Particularly notable are the flour de lys and shamrocks that make up much of the ornamentation. The church is also known for its extensive collection of oil paintings, rosette stained-glass windows, and ten bells that are commonly referred to as “St. Patrick’s Chimes.”

After many restorations funded by the government and by the public, St. Patrick’s Basilica was officially promoted to a “minor basilica” by Pope John Paul II in 1989 and was recognized as a National Historic Site of Canada in 1996.

At the summit of Montreal’s Mount Royal lies Saint Joseph’s Oratory, Canada’s largest church. St. Joseph’s oratory can be seen from kilometres away due to its height and its position on Mount Royal. In fact, as the highest point in the city, it is one of the few buildings that defy Montreal’s strict height restriction under their municipal building code.

Saint Joseph’s Oratory was founded in 1904 by Saint André Bessette, better known as Brother André. The original structure that housed Brother André’s congregation is a gothic revival-style chapel that still exists today, although it was relocated to allow for the construction of the current structure.

Saint Joseph’s Oratory as we currently know it was completed in 1967 by a number of architects over the course of many decades. Its facade is considered to be designed in the Italian Renaissance revival style, while its interior is considered Art Deco. The interior commonly referred to as “The Shrine,” boasts various sculptures, stained glass windows, and mosaics. Its multi-angled arches have become distinctive of the basilica’s design.

Perhaps the most defining feature of the Oratory is its dome, which is known as the largest dome in Canada. Visitors of the church can also tour the Crypt Church and Votive Chapel to take in the distinctive architectural styles of these rooms.

4. Mary, Queen of the World Cathedral

The third-largest church in Quebec and the seat of the Roman Catholic Archdiocese of Montreal, the Mary, Queen of the World Cathedral is a commanding presence in Dorchester Square, right in the middle of downtown Montreal.

The Cathedral was built to replace the Saint-Jacques Cathedral which had burned down. Completed in 1894 as a replica of St. Peter’s Basilica in Rome, the Cathedral is a Renaissance-revival style building that was designed in the shape of a Latin cross. At the time, the church was named the Saint James Cathedral but was renamed to Mary, Queen of the World in 1955 at the request of Pope Pius XII.

The Mary, Queen of the World Cathedral boasts three distinct chapels: the Chapel of the Assumption, the Baptistery, and the Burial Chapel. The Burial Chapel serves as the resting place for all titular and auxiliary bishops.

Also distinctive of the Cathedral are the statues of the patron saints that line the entrance, and the neo-baroque ciborium positioned under the dome inside. You can also find paintings in the transept that depict many of Montreal’s historical events.

While not technically in Montreal, the Sainte-Anne de Varennes Basilica is just across the St. Lawrence River and is a must-see attraction for anyone touring Montreal’s basilicas. The Basilica was designed under the principles of Byzantine architecture, however certain elements like its concentric arches and columns borrow from Roman architecture.

The current Basilica was built as a modernization of two previous churches on the same site, one built-in 1692 and one built-in 1718. A priest by the name of Duburon envisioned a church capable of creating fame for the town of Varennes and completed the current structure in 1780. To accommodate the growing population of Varennes, Saint Anne Chapel, Saint Joachim Chapel, and the Calvary Cross were erected in subsequent years.