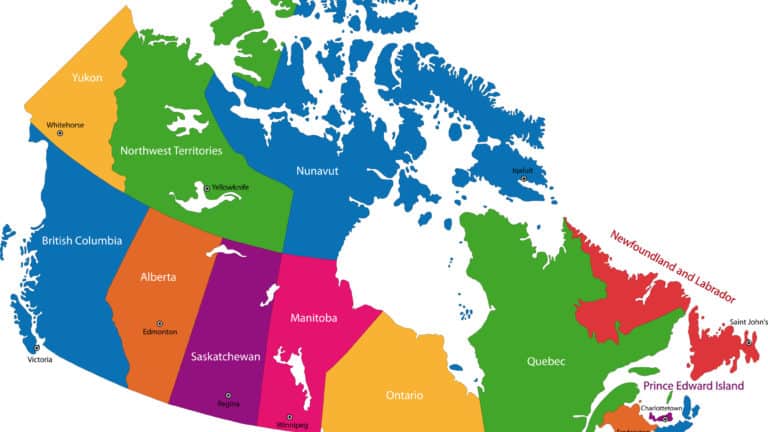 Many people don’t realize just how vast Canada is. It is actually the second-largest country in the world in terms of size, second only to Russia. But, with only 37 million people in Canada compared to the 144 million people in Russia, there’s plenty of space to move in Canada. The only question is, where should you move? With ten provinces and three territories, it can be hard to choose. Keep reading to find out which is the best province to live in Canada for you.

Ontario is one of the most versatile and best provinces to live in Canada. The province has big cities like Toronto if that’s what you prefer or small, rural towns like Newmarket. With fifty-two cities and eighty-nine towns to choose from, there’s something for everyone.

When people think of Canada’s stunning nature, they don’t normally think of Ontario. But, Ontario has over a hundred provincial and national parks throughout the province. Despite not having a coastline, most of these parks have beautiful beaches along the province’s many lakes. Notably, Bruce Peninsula National Park is known for its clear, blue water where parts of the park you can only get to by boat.

If nature is not your thing and you prefer big cities, Ontario is still the perfect place for you. Ontario hosts Canada’s most populous city, Toronto. Of the 37 million people in Canada and 14.5 million people in Ontario, almost 6 million of them live in Toronto. In fact, out of the top fifteen most populated cities in Canada, Ontario has seven of the cities including Toronto, Hamilton, Ottawa and Kitchener. So, there are great options in Ontario for a big or small city life.

Due to Ontario having great options for cities and natural areas, it is a great province for families. But, students and young adults can also find good prospects in Ontario as the province has some of the best universities in North America. University of Toronto is the number one school in all of Canada and sixteenth in North America, following big-name schools like Harvard and Massachusetts Institute of Technology. University of Waterloo and McGill University are also great schools within the top fifty best universities in North America. Not only are the universities in Ontario good, but the public school system is one of the best in the world. This means that children will get a great education in Ontario from Kindergarten all the way to university.

Quebec is the largest province in terms of size, but the second-largest province population-wise with a population of 8 million people. The interesting thing about Quebec is that it is the only province in Canada that has a predominantly French-speaking population. French is actually the only official language in the province despite being bordered by three English dominant provinces: Ontario, New Brunswick and Newfoundland. 85% of the population in Quebec speaks French while only 13% speak English.

So, Quebec may not be the place for you if you don’t speak French or don’t want to learn the language. That being said, the province has a lot to offer.

Due to being a French-speaking province, Quebec has a very different culture and aesthetic than the rest of Canada. The province has preserved their Francophone culture that the first French settlers brought with them, so their architecture and way of life are more related to France’s than Canada’s. Quebec is very proud of its French heritage as they often celebrate it with festivals and events like the New France Festival that showcases Quebec’s French history. If you can’t move to France, but still want to experience the Francophone culture, Quebec is the perfect province for you.

With Quebec’s French culture comes a rich culture of arts throughout the province. Quebec values the arts and this is exemplified by their many orchestras, theatres, museums, galleries and playhouses around the province. There are plenty of famous actors, actresses singers and artists from Quebec. Notably, Celine Dion, William Shatner, Nora Fatehi and Denis Villeneuve are all from Quebec.

If you prefer bigger cities, British Columbia’s biggest city is Vancouver with over 50% of the population living there. It has been constantly listed as one of the best cities to live in and was actually number three in the world in 2019. This is because Vancouver is safe, there are great work opportunities and overall, a high standard of living. The city is also located between the Rocky Mountains and the Pacific Ocean, so there are great views all round. With such a large population in Vancouver and the province’s proximity to Asia, there is a very diverse mix of cultures. This can be exemplified in Vancouver not only through the people you see, but the types of shops and restaurants there are as well. No matter your race, you will feel at home in Vancouver.

Alberta is another province that is well-known for having stunning nature areas. It is the fourth largest province both in size and population with 4.3 million people. The province shares the Rocky Mountain range with British Columbia, so it is also a popular province for many of the aforementioned outdoor activities like hiking and mountain climbing. What sets Alberta apart from British Columbia, however, is the province’s high standard of living.

Alberta is the most cost-effective province to live in. The province’s minimum wage is almost $3 more than Canada’s average, this is a huge deal when provinces like Ontario tend to only raise their minimum wage by 25 cents a year. Not only are the province’s wages high, but so is their employment rate. Alberta is constantly creating jobs with jobs in retail, tourism, automotive service, healthcare workers and contractors in high demand. The province also offers more bang for your buck as there is no provincial sales tax. This means that the tax on goods is only 5% compared to a province like Prince Edward Island where their tax rate is 15%.

Not only is Alberta a great place to work, but it is also a great place to spend time in nature. With 473 provincial parks and 5 national parks, there is something for everyone. Alberta has stunning mountains and crystal-blue lakes like the well-known Moraine Lake in Banff. You can go hiking, camping, fishing, kayaking and more in summer, especially since there is low humidity and the sun stays bright until at least 10 pm. Alberta is actually considered the sunniest province in Canada. Don’t forget that Canada is cold though and the temperature in winter can go down to -40 degrees Celsius. This leaves room for great winter sports like skiing and snowboarding.

In the middle of Canada between Alberta and Manitoba is the Canadian province of Saskatchewan. With a smaller population of 1.1 million people, Saskatchewan is often overlooked. Saskatchewan is quite an outdoorsy province with activities like hunting, fishing and camping being the most popular, but there are many other benefits if that’s not your type of fun.

Saskatchewan has one of the lowest costs of living in all of Canada. Housing costs are low, so owning a home is a realistic possibility in Saskatchewan and there are also plenty of rental opportunities. Education costs are also low as there are no tuition fees for public schools and a lot of graduates of post-secondary programs are eligible for a rebate of $20,000 from their tuition. Healthcare costs are low as well as residents do not need to pay personal premiums or charges for health services as the government provides medical, hospital and drug insurance plans. Although Saskatchewan does have a provincial sales tax, it is only 6 percent, the lowest of any province that has this tax.

Aside from the excellent standard of living in Saskatchewan, there is plenty to do. Since the population is low, nature in the province is left quite untouched and there is a lot of it. There are sand dunes, hills, mountain ranges, prairies, and thousands of lakes and rivers. This leaves room for activities like canoeing, swimming, ice-fishing or normal fishing, snowboarding and more. If you don’t like nature, however, this may not be the province for you. With so much space and so few people, there is a lack of entertainment other than going outside. Cities like Regina do have bars and restaurants, but the nightlife is not big.

Manitoba is another affordable province with beautiful nature. It is the last of the three Prairie Provinces after Alberta and Saskatchewan. Manitoba has a lot to offer nature-wise with a hundred thousand lakes throughout, but there is also a high standard of living in the province.

Manitoba has some of the lowest prices for big expenses like homes, auto insurance, tuition for university or college, and electricity. This allows for great opportunities to save as an income of $75,000 a year among a family of five will still leave around $12,000 in savings or to spend after basic costs are paid for. This leaves Manitobans with a lot of money to spend on things like vacation homes and recreation.

Unlike Saskatchewan, Manitoba has plenty of entertainment inside and out. There are over 100 festivals of various types every year including Canada’s largest folk music festival and a winter carnival. Art is really valued in Manitoba as well as there is a Royal Winnipeg Ballet, a Symphony Orchestra and plenty of theatre showcases.

Outdoors, Manitoba has a lot to offer as well. As previously mentioned, Manitoba is often called the land of the lakes because there are so many. This leaves room for fishing, swimming, kayaking and canoeing. Not as well-known is that Manitoba also has its own mountain ranges although they are quite smaller than British Columbia’s and Alberta’s with mountains like Blady Mountain and Hart Mountain, standing at just over 800 meters.

Manitoba also has bigger cities like Regina and Brandon. Brandon is one of the best cities to live in as it has one of the lowest crime rates in Canada. There is also affordable housing and an unemployment rate below 5%.

Last but not least on our list for the best provinces to live in Canada, is the only province out East that we’ve discussed: Nova Scotia. The province has almost 1 million people, making it Canada’s most populous of the three Maritime Provinces which are made up of New Brunswick and Prince Edward Island as well. This also means Nova Scotia is the second-most densely populated province after Ontario due to its small size, but high population. So, why do so many people live in Nova Scotia?

The interesting thing about Nova Scotia is its geography. It has a mainland attached to Canada, but has many offshore islands like Cape Breton Island on the Atlantic Ocean. No matter where you are in Nova Scotia, you are not more than thirty minutes away from the ocean. This means that there are a lot of beautiful beaches, shorelines and lighthouses to explore. There is also great, fresh seafood in Nova Scotia.

Since Nova Scotia is quite populated for its size, the job market and wages can be tough; this is the case in all the Maritime Provinces. Most work in Nova Scotia is seasonal and based around tourism in the summer. This means that finding a long-term job can be hard. A lot of jobs available are also manual labour jobs like fishing and construction which can be tough, laborious jobs. Nova Scotia also has quite a low minimum wage at $12.55 an hour when a livable minimum wage should be at least $15 an hour. So although the cost of living is lower, finding a job and earning enough to justify living in Nova Scotia can be tough.