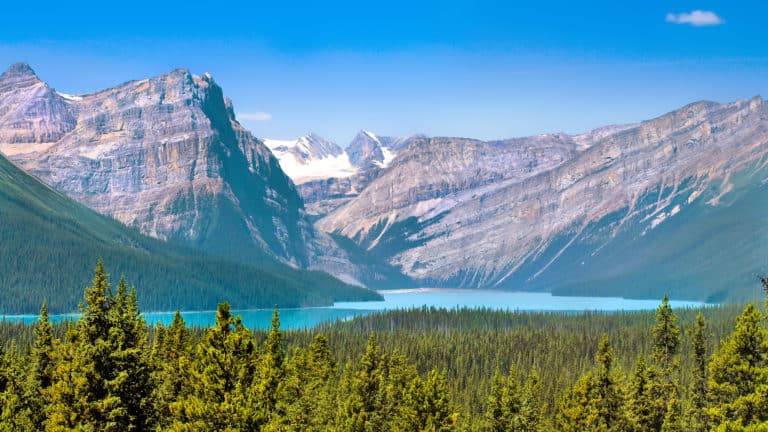 As the world’s second-largest country at almost 10 million km2, it is not surprising that Canada is home to some of the greatest natural wonders the world has to offer. Between the lakes, glaciers, and beaches, there is no shortage of sites for a nature buff to take in when travelling Canada. 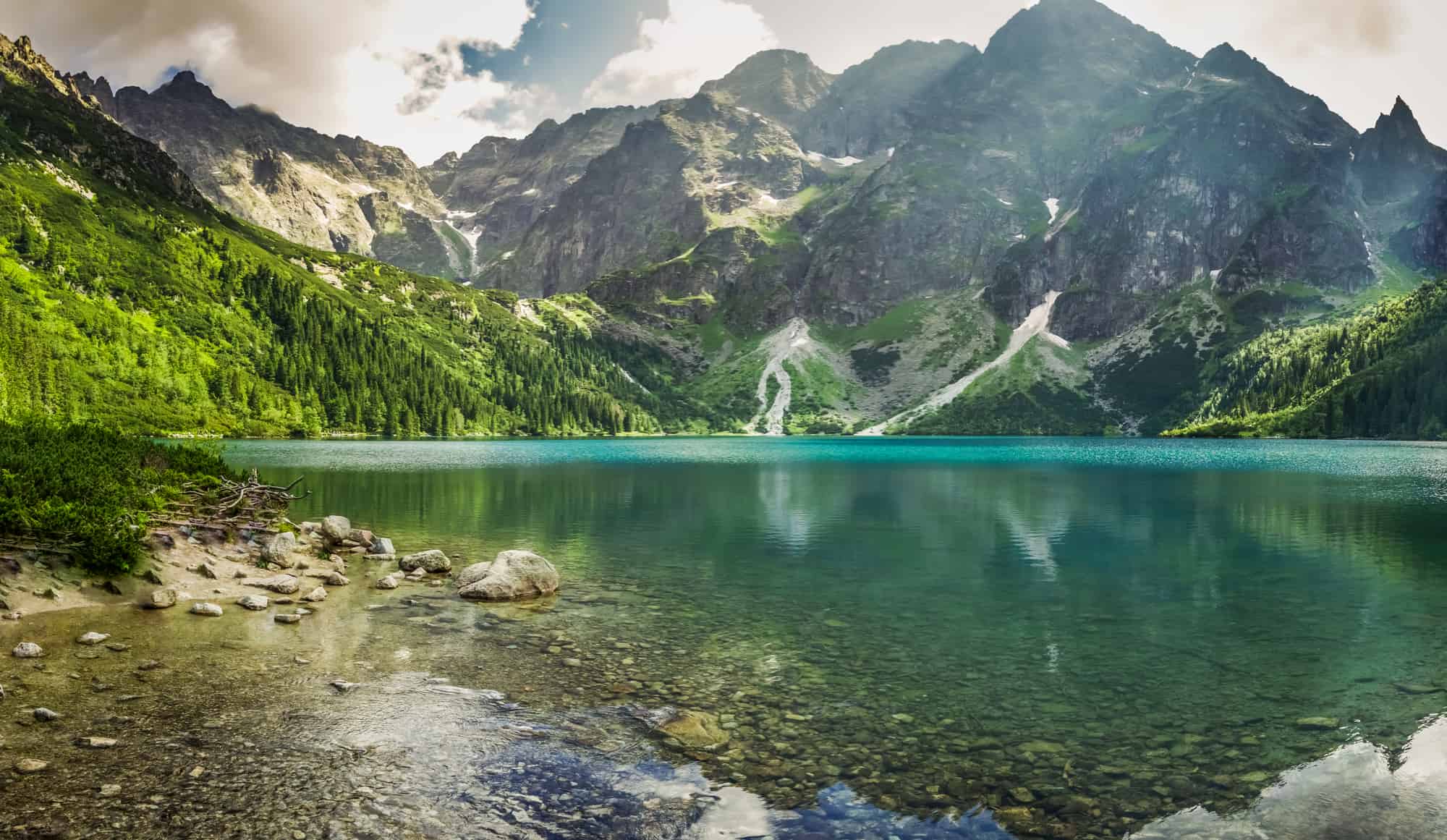 The Canadian portion of the Rocky Mountains sometimes referred to as the Canadian Rockies, spans between Alberta’s Interior Plains and Northern British Columbia. It encompasses many sub-ranges including the Hart and Muskwa Ranges in the North, and the Kootenay and Kananaskis Ranges in the South.

The peak of the Canadian Rockies is Mount Robson in British Columbia at 3,954 meters high. Its height and grandeur attract mountaineers from all over the world, however, few are actually able to summit the mountain due to its steep glaciers and volatile weather conditions.

The most popular attraction of the Canadian Rockies is Jasper National Park in Alberta. Two million visitors flock to the park every year to take in the Rockies, as well as the rivers, glaciers, and valleys it has to offer. Whether you are hiking, camping, canoeing, or rafting, Jasper National Park is a must-see for any world traveller.

Other unique attractions of the Rocky Mountains include Lake Louise, the Icefields Parkway, and Canmore. 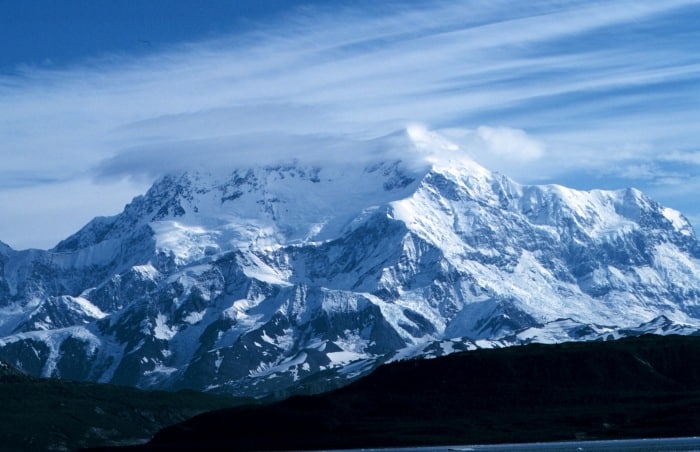 Tracing the Pacific Coast and straddling the border of British Columbia and the Yukon Territory, the St. Elias Mountain Range is the highest coastal mountain range in the world. The range is home to all of Canadas highest mountains, including Mount Logan, Mount St. Elias, Mount Luciana, and King Peak.

Its peak, Mount Logan, the is the highest peak in Canada and the second-highest in North America. Even at 5,959 meters high, Mount Logan is still gaining elevation due to continuous tectonic shifting. While Mount Logan might be an advanced mountaineer’s dream, it is seldom ascended due to average temperatures that are well below freezing.

Mount Logan resides in Kluane National Park, an area protected as a world heritage site due to its unique fauna, species, and glacial landscapes. Kluane is a popular fishing destination due to the Arctic Grayling, lake trout, and sockeye salmon that reside in Kathleen and Mush Lakes. Kluane is also a beautiful place to hike, boat, or even just go for a picnic.

In the winter months, Kluane National Park turns into a winter wonderland that offers a wide array of winter activities. Back-country skiing, cross-country skiing and snowshoeing are popular. But its also one of the few places left in the world where you can still go dog-sledding.

At 29 million years old, the Canadian Cascades is considered volcanic, although dormant. It is comprised of many geologically fascinating formations like the Chilliwack batholith and the Pemberton Volcanic Belt.

The Canadian Cascades exist only in British Columbia and peak at 3,160 meters high. To take in the full breadth of the Cascades, visitors often take road trips down the scenic Route 97. Route 97 does not just offer stunning views of the Cascades; it also takes you down the Okanagan Corridor where you can sample some of Canada’s best wine.

Also part of the Canadian Cascades is Mount Garibaldi and the Garibaldi Provincial Park, where visitors can hike, climb, swim and fish. In the winter, the Diamond Head area of Mount Garibaldi becomes a popular destination for skiing and snowboarding.

Other points of interest include the Dark Sky Highway, which leads to many scenic lookouts and ski resorts, as well as many small towns in the Fraser Valley region. 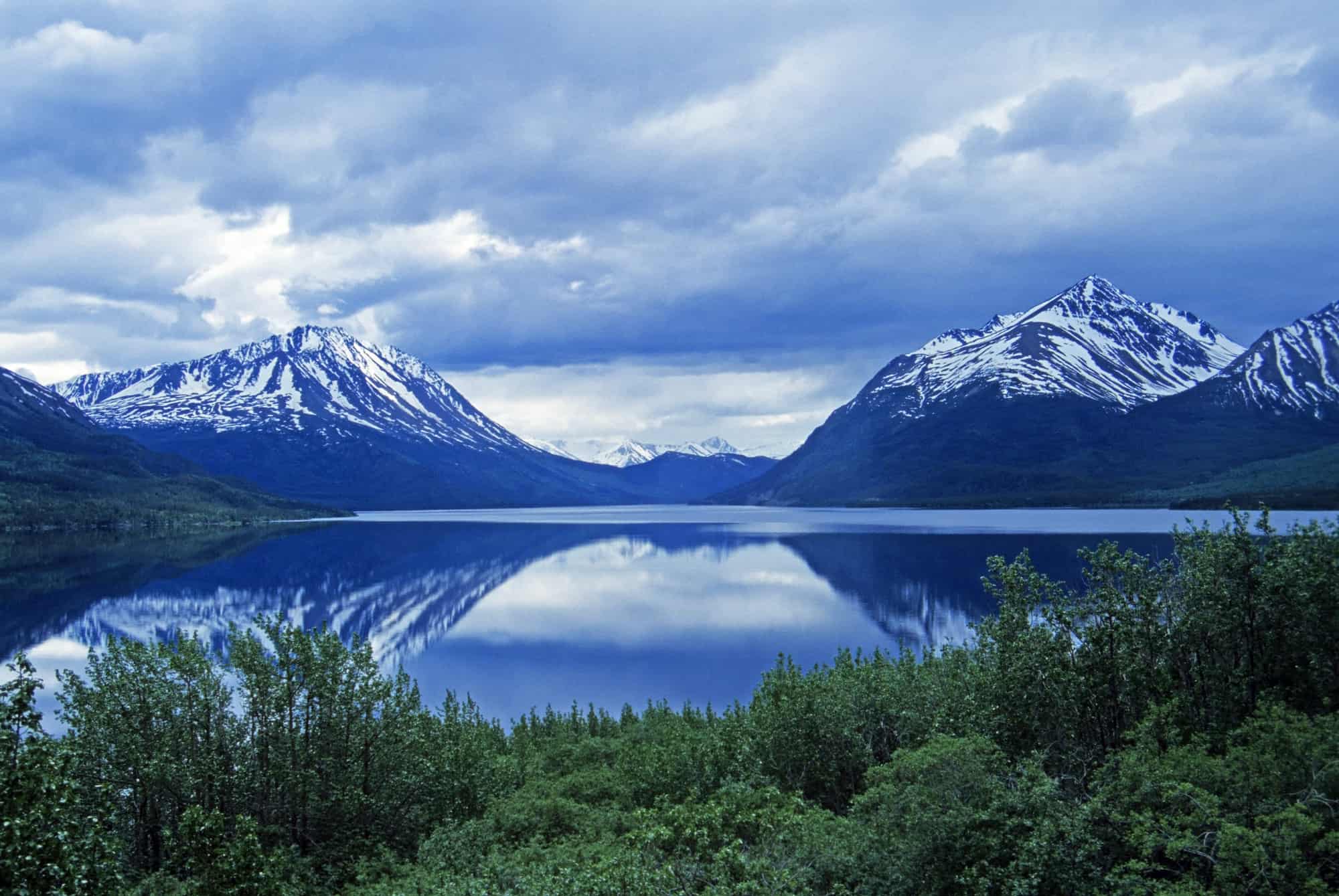 Extending through the Yukon, the Alaska Panhandle, and much of the coast of British Columbia, the Coast Mountains are part of the Pacific Ranges and the “Pacific Ring of Fire.” At 1,600 kilometres long and 300 kilometres wide, most of the mountain range is uninhabited and underdeveloped, with the exception of Whistler.

Whistler is a resort town in British Columbia that is world-famous for winter sports like skiing and snowboarding. However, Whistler also offers a host of activities like hiking and mountain biking, as well as great dining experiences and nightlife.

Other activities include zip-lining, golfing, boating, ice-fishing and mountain climbing. If you are touring Canada’s west coast, you would be remiss not to experience Whistler, whether you are travelling in the winter or summer. 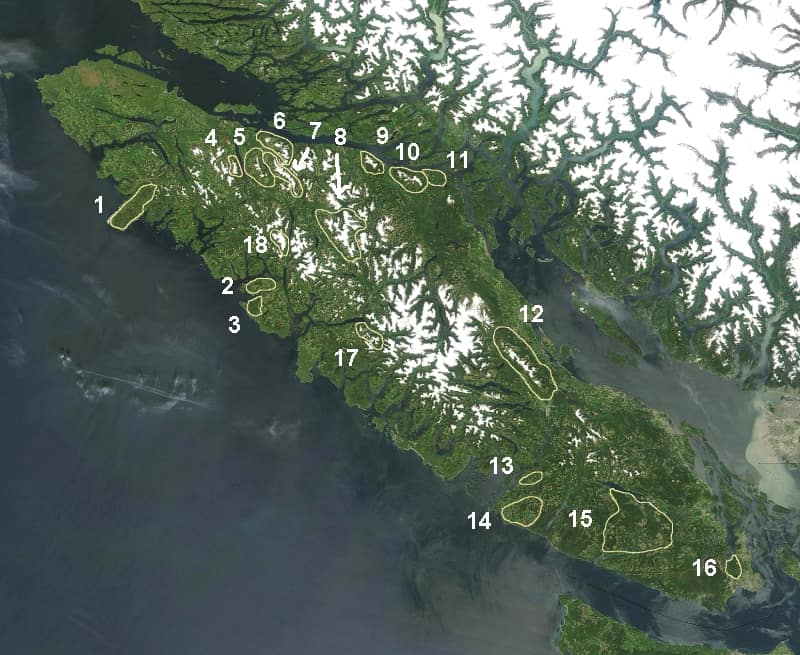 The westernmost mountain range of the Pacific Cordillera, the Insular Mountains, can be found entirely within British Columbia, specifically on Haida Gwaii and Vancouver Island. These two islands are dotted with many sub-ranges including McKay Range, Crease Range, and San Christoval Range on Haida Gwaii, and Seymour Range, Refugium Range, and Franklin Range on Vancouver Island.

Haida Gwaii, formerly known as the Queen Charlotte Islands, has been home to the Haida people for 13,000 years. Many of the islands and provincial parks are protected as heritage sites and nature reserves. While not a popular tourist destination, Haida Gwaii is a point of interest for those interested in geology, wildlife, and indigenous politics.

Vancouver Island is home to the Insular Mountains’ highest mountain, the Golden Hinde, standing at 2,195 meters high. The island attracts many visitors every year, particularly in beach towns like Tofino where surfing, scuba diving and fishing are popular. When they are not hiking or climbing through the many mountain ranges, visitors also visit harbour town Nanaimo for its many shops and restaurants.